Alice Curtice Moyer Wing wanted equal voting rights for women. She traveled the Missouri Ozarks with her horse La Belle in the 1910s, talking to people about voting rights. Her experiences were chronicled in a series of articles published by the St. Louis Post-Dispatch from 1916-1919. Missouriwomen.org is featuring Moyer Wing’s articles as we commemorate the 100th anniversary of women’s voting rights.

The following was Moyer Wing’s sixth article published in the St. Louis Post-Dispatch on February 25, 1917:

Campaigning for suffrage in the Ozarks has its disappointments. In this story, written for the Sunday Post-Dispatch Magazine, Mrs. Alice Curtice Moyer-Wing frankly tells how her best efforts failed to convert a former legislator who is “sot” in his ideas about women. The nature of his beliefs makes the story:

It was the autumn fishing season when La Belle and I came upon the statesman. His face was pink and fat and he wore an expression of supreme, unsophisticated innocence as he fished and smoked and sang snatches of hymns:

“The devil thought he had me shore, O, glory halleluyer!

But I hid behind the smokehouse door, O, glory halleluyer!

At that moment he looked up and I was discovered. “Uh-huh,” he said. “Here at last, air you? We’d purty nigh concluded you was goin’ to pass us by, seein’ that we was newcomers. Been lookin’ fer you a right smart while.” 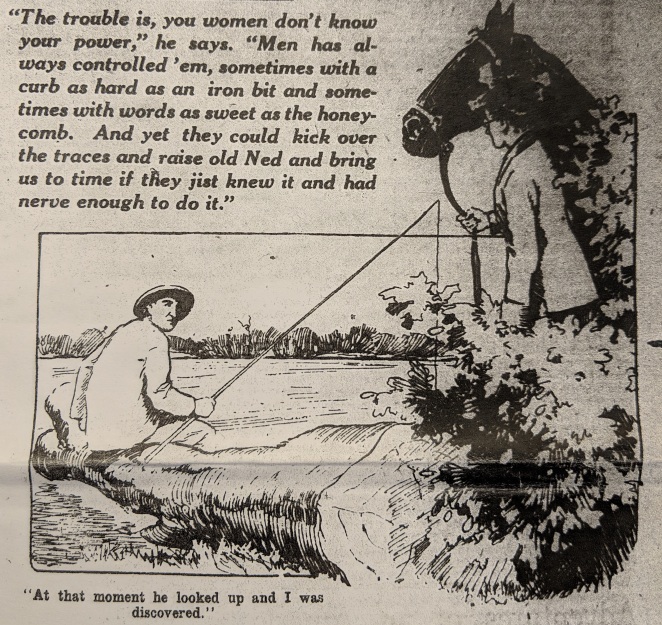 “I didn’t know you were a newcomer,” I said. “But I shouldn’t have passed you by on that account. And, of course, I’m hoping that you believe in”–

I admitted that I had.

“Well, them’s the rules, I reckon, but they ain’t bitin’ nohow, and I ‘lowed maybe a little music would stir ‘em up.”

“Shore now, I was jist a comin’ to it. Haw! haw! haw! Say, if I was you, I’d git this work done early. Next winter is liable to be a scorcher fer cold. All the signs is liable to pint that a-way.”

“Why, the signs. Hawg-killin’ time is when a person can notice a right smart. If the melts is thick, it’s a shore sign that the winter is goin’ to be a bad one. Hawgs is shore some weather prognosticators. Why, you’ll always know what a winter is goin’ to be if you’ll jist watch ‘em. When it’s going to be mild, a hog’ll jist natcherly loaf on the job of house buildin’ – jist patchin’ up his last year’s nest here and there, sort of careless like. But when you see him workin’ early and late to make a commodious dwellin’, so to speak, jist look out! These here razorbacks is powerful knowin’.”

“That’s what I heerd, that you was a Ozarker yourself. And when you see ‘em commence to git into their beds early, and you hear ‘em squallin’ and a pullin’ kivver”–

“Yes,” I said again, “but it’s a good while before we can begin to look for these signs. Do you believe in”–

“Woorman suffrage? Haw! haw! haw! Jist a-comin’ to that. Yes, it’s a right smart while, but they ain’t nothin’ like takin’ time by the topknot, as the feller says. And if he has long bristles and the animals has long fur on ‘em, it’s a shore sign of a long, hard winter.”

“Pardon me,” I said. “I cannot talk longer. But if you will read this literature you may change your mind. Or, if you will tell me now why you are opposed to woman suffrage, maybe I can explain away the difficulty.”

“I was jist a-jollyin’ you along.”

“Because you wished merely to dodge the question?”

“Why, the women, of course. Jist jolly ‘em along, lettin’ on like you’re goin’ to consider a thing and keepin’ clean away from it. Gen-tull-men! I reckon that tip was handed down by old Father Adam.”

“No use arguin’. I ain’t sayin’ what state I’m from, but it’s sich a close neighbor to old Mizzoo that I was right at home when I bought this land and moved in. And I’ve been in the Legislature more’n oncet. And when the women would gether in to ask fer somethin’, blamed if we could git round to ‘em. We shore was some hard-workin’ men.”

“Yes,” I said, sympathetically, “you must have been.”

“We shore was. Why, oncet it tuck us purty nigh onto a week a-debatin’ and discussin’ as to which was the worst crime, to steal a chicken in the day time or to steal it at night. And there was that cussin’ bill! Say! that was a plumb sight! It was to fine a man for cussin’ within a mile of any residence. I reckon we spent another hard week a-parleyin’ over that. But-fun! Don’t talk! It was fun on wheels!”

“No use arguin’. Ain’t I been to the Legislature? Don’t I know?”

I turned LaBelle’s head to the road.

“Don’t go away mad,” he said. “Jist admit that you woman have been jollied all your lives. And furthermore, you’ve jollied yourselves into thinkin’ that you hain’t – and it makes you mad to hear about it. They’s jist one cure fer it: Quit jollyin’ yourselves. Quit it, I tell you! Don’t go yet. I reckon it’s about dinner time. Come on up to the house. Neely can git up a snack in no time and I reckon La Belle is a hankerin’ fer some oats. Don’t feel too bad. The trouble is, you women don’t know your power. Onct up in St. Louis I stood watchin’ a feller abusin’ his hoss, and I says to myself: ‘If I was that hoss, I wouldn’t stand fer no sich treatment. I’d jist up and kick that fool driver’s head off.’ But there was the driver a holdin’ him with the bit and line because the hoss didn’t know he could stand up fer hisself. It’s jist that a-way with women. Men has always controlled ‘em. Sometimes with a curb as hard as the iron bit; sometimes with words as sweet as the honey comb, as the feller says. But control ‘em we do – handed down to us, I reckon, from the old, old times when we discovered that we could swing the biggest club and hit the hardest licks. And yet they could kick over the traces and raise Old Ned and bring us to time any day if they jist knew it and had the nerve to try it.”

“But when the daring ones do attempt it” – I began.

“Yes,” said he, taking my sentences away from me, as was his habit. “Yes, when the darin’ ones do attempt it, the world sets up a howl, jist like the rabble that runs after the runaway team and lashes it back to the harness. Sometimes we jist jolly ‘em back, but that they go back at all is jist because they don’t know that they don’t have to. Now, mind you, I ain’t tellin’ this to every woman. A man wouldn’t tell it to his wife, I reckon, but I”d jist jolly Neely back agin if she was to hear about it.”

“How did you happen to go to the Legislature?” I asked, as La Belle and I followed him “up to the house.”

“Well, you see, they sort of pass things around down in our country. You don’t reckon that a man always gits a office jist because he is natchelly fitted fer it, do you? Why, the smartest and the best man very often never so much as gits a smell at the public feed trough. No, sir! It’s the ring or them that’s been useful to the ring that gits there. They mayn’t know enough to come in out of the rain, but if they air useful to the gang, or if they belong to it, jist as shore’s you’re borned, they’ll git their heads in the trough plumb up to their ye’rs. Well, I had done a right smart of pullin’ fer some of the fellers, and commenced to fell that it was my turn. The county offices had all been promised, so they sent me up to the Legislature. I was a good jollier, they said, so they sent me up again, but that was all I ever got.”

“Why did you take to farming?” I asked. 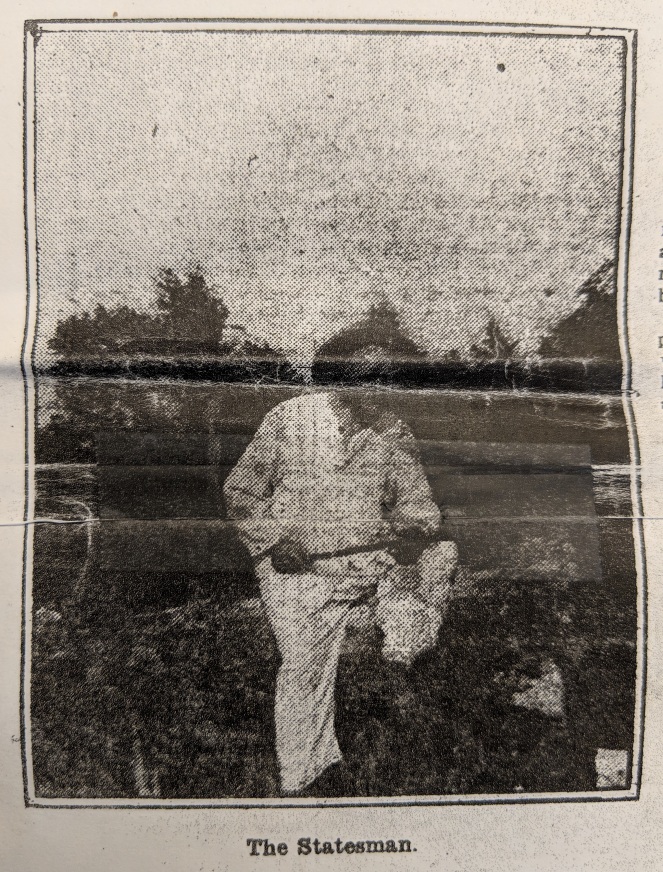 “Fer the same reason, I reckon – that other ex-officials and disappointed politicians take to it. Ever notice how many of ‘em do? It’s mighty soothin’ to that sick, holler feelin’ we all have – diggin’ around in the ground is.”

Neely met us at the door. “Jimmie,” she began severely, “you knew that this was wash day, and yet not a stick of wood did you git fer me. And I had to dig the pertaters and git the vegetables and drive the calves off the medder, and”–

“Shore, Neely, honey, I did plumb fergit it. Ain’t it a shame. But actually, honey, it was sich a nice, purty spot down by the creek – and I got to wishin’ you was with me. Then I got to thinkin’ of the time when we was jist sweethearts and didn’t keer a darn fer nothin’ but jist to be together. And I jist stayed and dreamed about you, honey, and gettin’ to what to see you – so here I am, jist a honin’ fer a sight of you. And here’s the lady we been talkin’ about.”

“Why didn’t you teach him a lesson,” I said to Neely as I was leaving, “by not having his dinner ready? He wouldn’t have forgotten the wood again, and if you had allowed the calves to stay on the meadow he would have mended the fence next time before he went fishing.”

She looked down at her bare feet a moment, thin pale little woman, who had twice remained behind while her husband was in the capital city of her home State, then, her face clearing, she looked up and said:

“But you saw how sorry he was. And he was thinkin’ of me all the time.”

“I can’t help it, La Belle,” I said a little later, when, in bending over, something splashed down on her mane. “We’ve lost our way in the woods more than once. We’ve been alone in the hills after dark, without knowing where we should sleep. We’ve been hungry, with nothing in sight to eat- and this is the very first time I’ve been weepy. You know it is. And you ought to forgive me this once. I suppose it’s because – well, do you remember what the preacher said to us the other day about the ‘cussedness of things?’ I guess that’s the reason for it; just the ‘cussedness of things.’”

View all posts by Greta