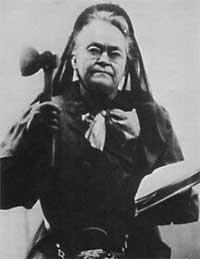 When Carrie Nation read Jeremiah 1:10 in her Bible, she wrote “SMASHING” next to it. Jeremiah wrote, “I have this day set thee over the nation and over the kingdoms to root out and pull down and to destroy …” and Carrie read, “pick up an axe and smash up bars.”

Carrie Moore was born in Kentucky and moved to a farm in Cass County just east of Peculiar, Missouri in 1855 when she was 9. She weathered the Civil War with her family in Texas and married a young doctor named Charles Gloyd just after the war. She was 21. Within the year, Gloyd would drink himself to death and Carrie would give birth to their daughter Charlien. Her experience with Gloyd– and messages from God– led Carrie down a path of deliberate destruction.

Carrie was a young single mother in 1870, with an infant and destitute mother-in-law dependent on her. She moved to Holden, Missouri, built a small house, and went to the Normal institute in Warrensburg. She taught school in Holden for four years but was fired and replaced by a school official’s relative. Having few other choices, Carrie married again. David Nation was 20 years older than her and had kids from a previous marriage. They moved to Texas to give farming a try. After operating a hotel, saddle shop, and unsuccessful cotton plantation the family was forced north because of David’s political involvements in Texas. They moved to Medicine Lodge, Kansas in 1889.

Kansas had outlawed liquor in 1881, but were never really serious about it. Not until Carrie Nation got involved, that is. She started a local chapter of the Women’s Christian Temperance Union and took it upon herself to protest establishments selling alcohol – peacefully at first, singing hymns and praying outside bars and addressing bar owners with a polite, “Good morning, destroyer of men’s souls.”

Not getting the results she wanted, Carrie grew frustrated. She, like most women of the time, was a victim of circumstance. Alcoholism had destroyed her first husband, a man she loved, and left her to fend for herself, his mother, and their daughter. Forced into another marriage for mere survival, she looked at alcohol as the crux of the problem – it destroyed homes, it destroyed families, and it destroyed the stability of women and children dependent on men.

On June 5, 1900, Carrie prayed for guidance. She heard the words, “Take something in your hands, and throw at these places in Kiowa and smash them.” She went to Kiowa, Kansas, found a saloon, and destroyed alcohol bottles with rocks. Soon she adopted a hatchet, making her attacks on saloons quicker and more effective. Between 1900 and 1910 she was arrested 30 times. She divorced in 1901.

No one else was taking the temperance movement to such extremes, and Carrie became a pretty famous figure. She developed a following of like-minded women who helped her destroy bars. She lectured internationally, published a newsletter, and sold souvenirs to pay her court fines and support her family. She may have taken temperance to a dangerous level, but along the way she helped people who needed it. She opened her last home, named Hatchet Hall, in Eureka Springs, Arkansas, to young women who needed help, financially or otherwise.

When she was 65, Carrie collapsed during a lecture and died in Leavenworth, Kansas. Today you can visit Carrie Nation’s grave in the Belton City Cemetery. Her homes in Arkansas and Kansas are still standing as well.

Carrie Nation’s legacy as a radical activist lives on. Her image has graced the likes of  funny t-shirts and beer coasters protesting alcohol taxes. There’s also a band in Kansas named for her. Although they wouldn’t tell me why they chose her for their image, they have been described as “a stagecoach on overdrive.” I think for those who knew Carrie’s wrath, that about says it.

Visit the collection of Carrie Nation papers on the Kansas Historical Society website for a glimpse at her personal papers and photographs of bars she smashed.

Carrie Nation and the Speakeasy